by Liam Scheff
Thunderbolts.info
A Satire.

Astronomers may have discovered the cause for a long-sought and troubling mystery – the cause of small bright fires in low to mid-sized mountainous regions worldwide, especially during warmer seasons.

NASAP scientists have determined that a new and startling breed of micro-mini rogue black holes may be responsible for generating these spectacular, but contained, light shows.

“We never thought this sort of thing was possible,” said David Prill, of the University of Gloucester, but we’ve been wrong before.”

According to Dr. Prill, the discovery occurred by lucky accident. “I was looking at photos of these mysterious fires, when I happened to glance at a recent Hubble telescope image of a quasar.” Dr. Prill explained. “We have recently proved that quasars are formed by the immense power of a black hole to generate unpredictable light shows and hot radiation zones in space. Staring at the photo of the fire in the mountains, I realized that a mini-quasar was precisely what I was looking at, but on a much smaller scale.”

Dr. Prill then went to his department chief and colleagues with his discovery. “They were all very excited – no one had ever considered this a possibility before – black holes right here on earth. It was a radical notion, but once we buckled down and did the math, it all began to fall into place.” 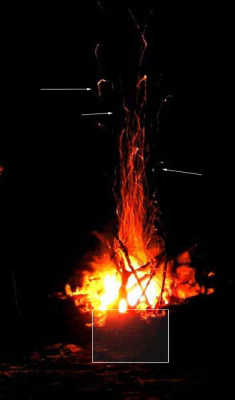 Scientists have highlighted (arrows) the explosive charged filaments radiating outward. Scientists speculate that the mini-black hole’s gravity is so concentrated that it actually cannot consume all the matter that it attracts, and that some matter is supercharged and flash-heated in a compression flame, which extends from the mouth of the rogue mini-black hole. The upward-spiraling filaments are radioactive particles of matter which were stirred up in the black hole’s pressure cooking ‘accretion bulb,’ and were so stimulated by the immense conflagration of matter, that they bounce off violently.
[Click to enlarge] 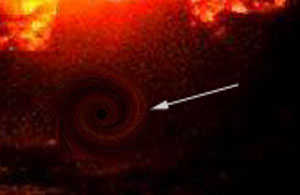 News about Dr. Prill’s discovery have been greeted with some skepticism from other astronomers. Dr. Felix Chandranakir of the University of Bhopal, in India said, “It’s all well and good to blame these fires on a black hole, but what about the wormhole that should be created?”

Dr. Chandranakir argues that the lack of evidence for the wormhole indicates that these may not, in fact, be black holes, but rather a new kind of celestial object, which he is calling “gravity igniters.”

But Prill remains convinced by the evidence. “At this point, we’ve collected so much data that to say that these aren’t mini black holes is tantamount to saying that the Holocaust did not occur.”

But, he added, mysteries remain. For example, how does the massive gravity stream draw in with so much force from such a small area? It is known that these mini black holes do not disrupt the local environment in collecting their matter at light-speed. Prill believes that this is due to the mini-black hole’s ability to super-condense matter at its perimeter. “It’s like pulling a big rope very slowly – you’re still getting a lot of rope,” he explains.

But these tiny earthly celestial objects still present mysteries. Dr. Prill: We have searched one hotspot [see image below] with every imaginable instrument, and we have not been able to find the black hole producing it. But we’re on the right track, because we finally know what we are looking for. This is truly an illuminating and revolutionary addition to what we now know about Black hole science. 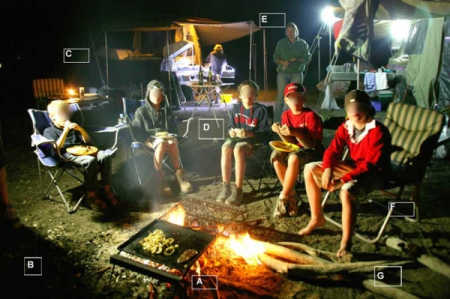 “One thing we do know, was that these boys have experienced what many of us Astronomers have longed to live through – sitting in the presence of a real, functioning Black Hole, with its myriad of known and predicted affects – the slowing and speeding up of time, the mixing of space and time, the shocks to our earth-bound sense of order and logic, the immense pull of matter into a singularity, so powerful that it produces all manner of explosion, light, radiation, glow, arc, fire, and sparking effects. It must have been quite magical for them.

As to the danger presented by these rogue mini-black holes, Dr. Prill takes a laissez-faire approach: “I wouldn’t worry, I think you’d probably have to get within a few millimeters of the thing to be affected by its gravity – because its gravity, like many black holes, is very local, and doesn’t affect most material around it – or it does, but in paradoxical and unexpected ways. This is the one thing we’ve come to know absolutely about black holes: they never behave as we’d thought they would.”

For the world of science fiction, this has been Liam Scheff reporting.