Can U Read Kant?, asks the Wall Street Journal, in its (laugh-and-cry-out) laudable review of… 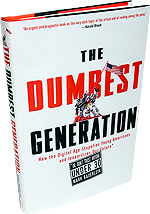 [F]rom 1981 to 2003, the leisure reading of 15- to 17-year-olds fell to seven minutes a day from 18. But the real action has been in multitasking. By 2003, children were cramming an average of 8½ hours of media consumption a day into just 6½ hours – watching TV while surfing the Web, reading while listening to music, composing text messages while watching a movie.

“Over and over,” he writes, “commentators stress the mental advance, the learning side over the fun and fantasy side.” Steven Johnson, in his best-selling “Everything Bad Is Good for You,” describes videogames as “a kind of cognitive workout.”

Jonathan Fanton of the MacArthur Foundation writes that children have created “communities the size of nations” where they explore “new techniques for personal expression.” Such assessments, Mr. Bauerlein argues, are far too charitable.

– New techniques for personal expression among communities the size of nations

“Mr. Bauerlein contrasts such “evidence-lite enthusiasm…blind celebration of youth, and an ill-informed optimism…for digital technologies with a weightier learning tradition.”

“[I]n the political arena: Participatory Web sites may give young people a “voice,” but their command of the facts is shaky. Forty-six percent of high-school seniors say it’s ” ‘very important’ to be an active and informed citizen,” but only 26% are rated as proficient in civics.”

“Between 1992 and 2005, the NAEP reported, 12th-grade reading skills dropped dramatically…only 24% of twelfth-graders are ‘capable of composing organized, coherent prose in clear language with correct spelling and grammar.’ “

“Conversation is affected, too. Mr. Bauerlein sums up part of the problem: “The verbal values of adulthood and adolescence clash, and to enter adult conditions, individuals must leave the verbal mores of high school behind. The screen blocks the ascent.“

It’s true, it’s true. (Just search a ‘blog-thread’ at Myspace, Youtube, or GNN, and see, or read, for yourself). It is depressing, and frustrating… and, oh sure, troubling, I guess…

But it’s also ruefully, terribly funny at times. Thread-reading can be a great source of satire – or unintentional self-parody. I mean, sure, it’s always fun to watch somebody misspell their way to oblivion…

But it’s nothing compared to watching “smart people” (that’s academics, no longer hidden by the ivy-covered brick walls of universities), fail and flail at logic, and lose their ability to function, when faced with the rigorous common sense of the street-level critic.

“[I]ndividuals must leave the verbal mores of high school behind.” But they can’t, because they’re “the dumbest generation,” argues the author.

Remind you of anyone you know?