From today’s Wall Street Journal, a very good, and succinct History of the holiday, by historian and author John Steele Gordon. A few excerpts: 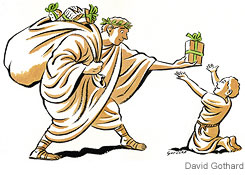 “In its earliest days, Christianity did not celebrate the Nativity at all. Only two of the four Gospels even mention it. Instead, the Church calendar was centered on Easter, still by far the most important day in the Christian year. The Last Supper was a Seder, celebrating Passover, which falls on the day of the full moon in the first month of spring in the Hebrew calendar. […]

By the time of the Council of Nicea [325 AD], the Christian Church was making converts by the thousands and, in hopes of still more converts, in 354 Pope Liberius decided to add the Nativity to the church calendar. He also decided to celebrate it on Dec. 25. It was, frankly, a marketing ploy with a little political savvy thrown in.

History does not tell us exactly when in the year Christ was born, but according to the Gospel of St. Luke, “shepherds were abiding in the field and keeping watch over their flocks by night.” This would imply a date in the spring or summer when the flocks were up in the hills and needed to be guarded. In winter they were kept safely in corrals. […]

It is hard to escape the idea that by making Christmas fall immediately after the Saturnalia, the Pope invited converts to still enjoy the fun and games of the ancient holiday and just call it Christmas. Also, Dec. 25 was the day of the sun god, Sol Invictus, associated with the emperor. By using that date, the church tied itself to the imperial system.

By the high Middle Ages, Christmas was a rowdy, bawdy time, often inside the church as well as outside it. In France, many parishes celebrated the Feast of the Ass, supposedly honoring the donkey that had brought Mary to Bethlehem. Donkeys were brought into the church and the mass ended with priests and parishioners alike making donkey noises.

In the so-called Feast of Fools, the lower clergy would elect a “bishop of fools” to temporarily run the diocese and make fun of church ceremonial and discipline. With this sort of thing going on inside the church to celebrate the Nativity, one can easily imagine the drunken and sexual revelries going on outside it to celebrate what was in all but name the Saturnalia.“

[end excerpt.
Read the full article at the WallStreetJournal.com.]

And so, friends and neighbors, I am inclined to think that we’ve moved yet again, from honoring Saturn, (or rebelling from him), to Christ, to… well, I think we should say a prayer in honor of our true Patron Saint, Adam Smith, whose holiday this is, in so many, many, many ways…

But whoever you pray to, and whatever you worship, a happy Christmas – a good, safe and warm holiday – and best wishes to all. Merry Christmas, everyone.