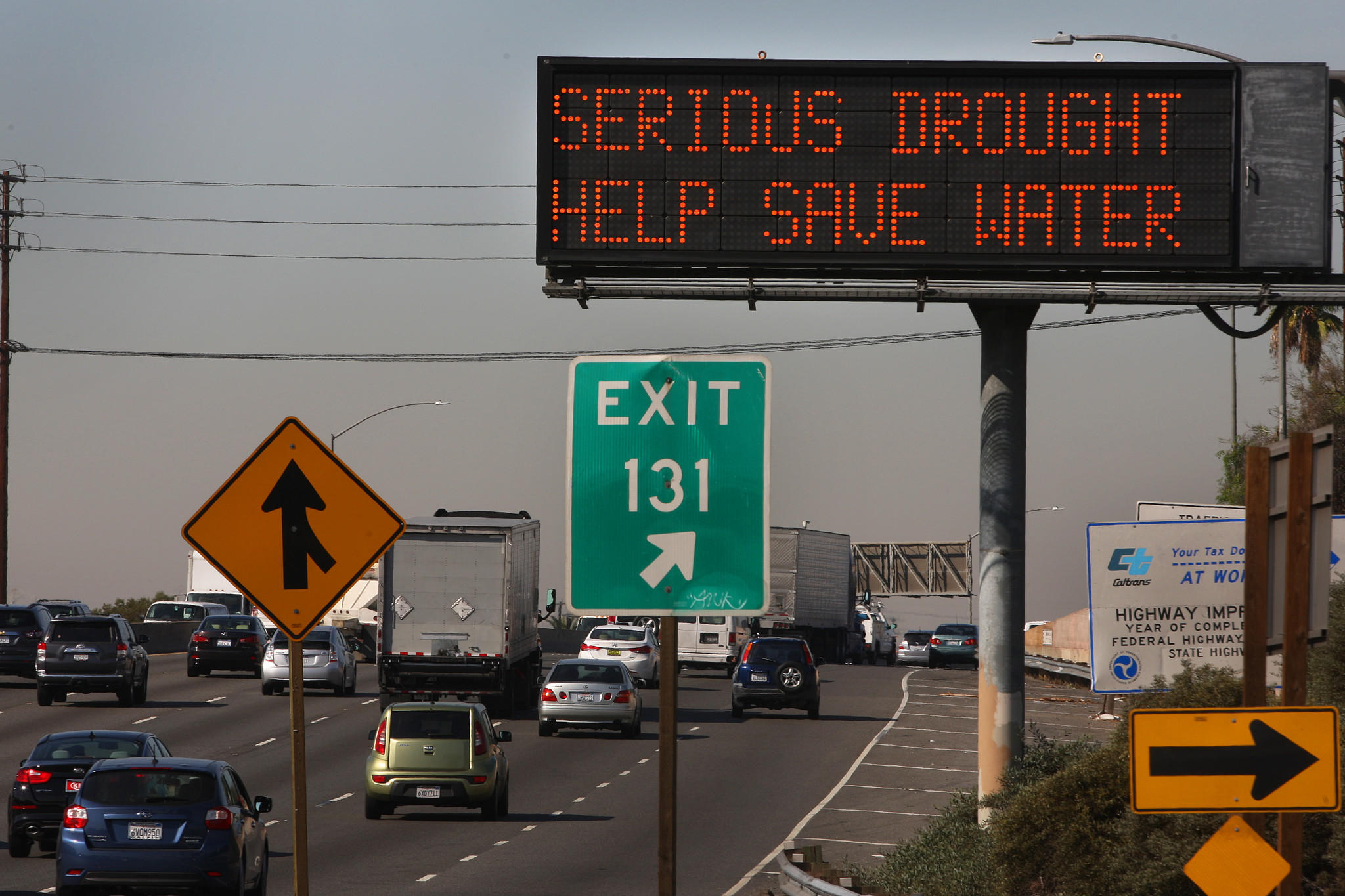 The drought in California is noticeable as soon as you step outside your apartment; the air is dusty, the air at a distance is a brown cloud, the earth is pure dryness; the soil yellow-brown, the leaves look like they’re holding their breath for a hard rain and turning slightly dingy in the process. Everything is on the verge of turning a last shade of pale green before yellow takes over the landscape.

But inside your apartment, you’d have no idea. The faucets run, there is no limit to how much water you can use; showers are easy and refreshing; baths, too. Washing dishes continues apace. Golf courses are in full swing. Swimming pools are full. And the major water users, the factory fields in the Central Valley, are pumping out fruit and vegetables to the world, while the factory farms on Route 5 pump out cow effluence and cow flesh to the country. Both take inordinate amounts of water. (Cattle are the worst, sucking up a thousand-plus gallons per edible pound of flesh, followed by pigs, chickens, and then crops at a distant fourth, at dozens of gallons per edible pound of food.)

That water isn’t coming from the sky; it’s being siphoned through massive diesel pumps, sucking the deep-earth reservoirs beneath the continent, beneath the valley; the valley that is sinking even further (in a move the geologists call “subsidence.”)

There are articles and propositions to deal with the endless pumping of groundwater, drying up underground super-lakes, diminishing the liquid hundreds of feet, so that the soil collapses and valley floors sink downward. The water being pulled out by massive diesel engines is not recent rainwater; it’s ancient liquid accumulated over many thousands of years – some of it is much older – and like its sister in the center of the country, the Ogallala aquifer – there is no possibility, not even an ‘end of the movie miracle,’ that can restock what took tens of thousands of years to create.

It’s the cows. But it’s also the pistachios and the almonds. Not a few – but tens of thousands of trees, monocropped, bees brought in on a fertilizing raid from all around the country. These trees are water hogs, and they are one of California’s true money crops. Try to take these fruits out of the basket of the California economy and you’ll see blood in the streets in protest.

Then there is the rest of the Central Valley, which, since the time of Steinbeck’s “East of Eden,” has grown from a source of local vegetables, to a State-wide resource, to the ‘green basket’ to the nation, providing broccoli, carrots and summer greens all year long, deep into the dead of winter in Georgia, Washington and Maine. In fact, I’ll challenge you to go to every supermarket in your town and find carrots that were NOT grown in California.

Why does the entire country have to eat carrots from California? (Don’t they grow anywhere else?) We do it because oil was cheap, dirt cheap – cheap as carrots! Cheaper, even. And oil powered the diesel engines that hauled and shipped products, goods and food, across the country on trains and flatbed trailer-trucks.

California was forced to grow food for everyone, by virtue of its diesel pumps sucking the last blood out of the soil, and because shipping was cheap, and because oil flowed from Texas (once upon a time), then Saudi Arabia (for 10 more minutes)… we all eat carrots from California.

Water Awareness? Too Little, Too Late

Now the water is running dry. Towns are disappearing; you can see the reports in the mainstream press. People are having to evacuate long-held properties (or pay a million dollars for massive pumps to inflict one last wound before abandoning), because the water has been sucked out of the earth to hundreds of feet beneath what was once there, and what took tens of thousands of years to put there.

This isn’t a problem with a colored-ribbon solution. The end of this story is the evacuation of the American West. You can kid yourself and tell yourself that this kind of thing couldn’t happen; that a once-desert would be returned to desert; that most of the 18 million inhabitants of the granite dust-bowl called “greater Los Angeles” would have to return home to Michigan, New York, Pennsylvania, Illinois, Asia, Europe, South America and Africa and wherever they came from to seek fame and fortune.

Look up: “drought, california, central valley, aquifer, pumping” for a long list of anxious, hand-wringing articles about the issue. You’ll see the full-color spreads of dead fields being invigorated with some of the last stolen water this State (and this country) will get. What you won’t find are solutions. That’s because there are none; not really. Not like we want there to be – a techno-fix. A bit of clever tool-making to bring us out of another near-miss.

Nope. What we have this time is something we’re not used to in post-WW2 America. It’s something called a “limit.” It can’t be overturned by vote; no ‘awareness’ campaign will solve it; it’s not erasable by act of contrition or other good deed.

The end result here is a loss of a cheap supply of food to millions – to hundreds of millions of people. And when the Ogallala follows suit in the coming decade (and it is), then the center of the country, once a “dust bowl,” will return to being prairie, and not farm-land. And then, everything changes, everywhere, and forever.

One of the two great illusions of the 20th C. is that we solved the terror of the dust bowl era – drought, pestilence and erosion – by implementing better farming techniques. What didn’t. What we did was to stick ten thousand deep straws into the underground fresh-water ocean in the center of the country, which we’ve steadily drained over 60 years. We’ve used more than half of what’s been sitting for millions of years, all in half a century. We’re not getting it back, anymore than you can put Fukushima back in a cement capsule. Some things are forever.

And when we hit a dry, sucking sound in the Midwest, then the monstrosity I call “Monsanto-land” dies a hard, rapid death, and billions of people don’t have the food (or non-food) they relied on in this land of plenty. Food stops coming from the Midwest. It stops being shipped from California on its daily schedule. And we’re left staring at our local suburban development, office parks and malls. Which are, by the way, not edible.

I’m not exaggerating, though I am trying to rouse you from slumber. We’re going to have a food disaster in the next ten years – or sooner – based on long-term water usage patterns, and our total reliance on mono-cropped monster-crops.

My advice? Start planting your lawn now. Learn “Permaculture” techniques. Pick up a permaculture course in your area. Go to meetup.com and join, or start a group.

And get ready to tell your homeowner’s association to go “frack” itself. Because in order to not starve to death, we’re all going to have to start using our lawns for gardens, despite what the local scolds say about “resale value” and green Monsanto lawns.

In the end, that sounds like a good thing. But you’re going to have to fight for it, because people are deaf, dumb and blind to this concept of a natural “limit.” You’ll have to make it part of your job, as someone who is awake and aware, to do your best to teach them.

Here’s a web search to start you with.

And then there is the issue of bottling water for profit – but that’s another story, and the truth is, it’s not a tenth of the problem, though the press will begin to grab at all the low-hanging fruit to ‘solve’ the problem.

Liam Scheff is the author of “Official Stories,” and is working on his new book about the tribe of humans, our sex lives and social networks, and the changes we’ll be faced with in a declining energy culture.